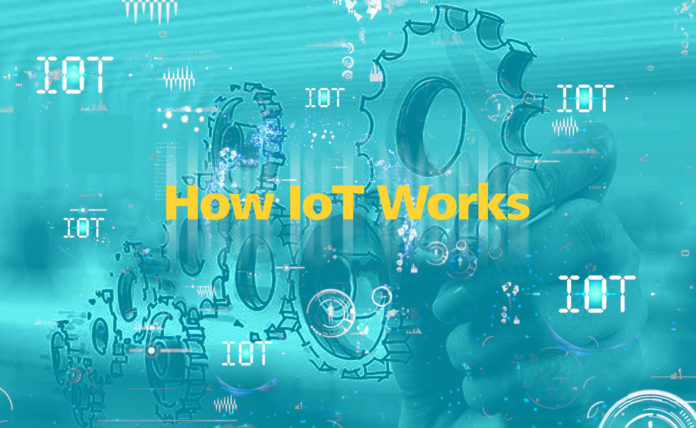 Most devices in the future will be connected with each other and a hyper decision framework will define the further course of action.

Before you understand how IoT works, it is important to understand what are the important pieces and how do they piece together the puzzle, let us, therefore, look at what are the different components involved here.

The “things” in IoT come to life because of sensors. Let’s take an IoT service example, where the heating of a machine is being monitored. In a typical scenario, a heat sensor would display the temperature on an analog or digital screen and someone would be monitoring it physically or on a more advanced level when the heating goes beyond a threshold there would be an alarm raised. You will need to be in proximity to the alarm to take action.

In an IoT setup, however, this sensor would be able to send a message to a decision engine that has rules built in to take the action.

There are many types of such IoT sensors including temperature, humidity, pressure, CO2, light, occupancy, motion and more. What’s important is that these sensors are an integral part of the ‘IoT device components’. They are the origin of truth and when connected with a decision engine, can make things work.

Now that we understand the sensor technology in IoT and what they do, let’s get to know how they communicate with the decision engine.

Decision engines are not new. They have been in existence for a few decades in the form of PLC’s. Most of these connections to the decision engines have been wired. With the increase in sensors and the proliferation of these in various devices and machines, it became more and more important to connect wirelessly.

Various connectivity protocols using radio frequency technology, have emerged in recent years. Some of the most widely used technologies are, Bluetooth Low Energy BLE, LoRa, ZigBee, SigFox and NB-IoT. There is no need to get flabbergasted by these terms. In simple terms, all these technologies have modulated the radio frequencies to provide wireless connectivity for data originating from IoT sensors.

While all the above technologies have use case-based applications in IoT, the one that has gained the most popularity is BLE (Bluetooth Low Energy). Most IoT sensors can send their data to BLE using UART (Universal Asynchronous Receiver/Transmitter) and Modbus communication protocols, BLE devices have the ability to transmit this information wirelessly, to other BLE devices and or BLE receivers called Gateways.

While adding many receivers may not be possible either because of the cost or due to infrastructure limitations, BLE devices can be arranged in a Mesh Network, so that the intended receiver can receive the message through nodes that are connected on the Mesh Network. Solutions like these have made the proliferation of IoT sensors and devices across industries such as healthcare, retail, logistics and manufacturing

Once the receivers have received the data, they can send this information to the decision engines, which are mostly sitting in the cloud Private or Public cloud using onboard GPRS, WiFi, or LTE.

Now that we have been able to send the data to the cloud, let’s try and understand what is the IoT Cloud and how it is an integral part to understanding how IoT works.

IoT sensors are usually resource-constrained and require a destination where they can send the data. An MQTT (MQ Telemetry Transport) protocol is generally used by these IoT sensors to transmit data. MQTT works like a broker that receives and transmits information to whoever subscribes to it on a topic. This MQTT server is generally also called the IoT server. Generally, rules are defined on this server so that data can be filtered as it comes in.

Some have confusion on why should one need an IoT server? The rate at which the IoT sensors send data, a regular server would not be able to handle the requests.

At QuicSolv Technologies, along with the MQTT, we have built a ‘Hyper Decision Framework’ called ISAE. Data from the IoT cloud server, is sent to this framework. Let’s now understand what is ISAE and why is it required.

IoT sensors have the ability to send data to the cloud. What we do with that data is very important. In one of our employee monitoring solutions, if an employee accidentally enters a hazard area, the hyper decision framework immediately sends an alarm and notification to people involved. So, let’s break this down to understand how IoT worked. The employee tag worn by the employee sent a message to the receiver that ‘I (40567) am here. The receiver sent this message to the MQTT server. The Hyper Decision Framework picked this up and checked if the employee ID 40567 was authorized to be in the area. If not, it sent out the alarms.

As another example, you may experience that in some movie theaters when the theater is not full, the temperature inside could be lower than what is comfortable and when the theater is full, you would like the temperature to be a bit lower to make it comfortable. This is because the HVAC is sending the same amount of airflow irrespective of the number of people inside the theater. By using our Occupancy IoT Sensor, we could send the number of people in the theater to the Hyper Decision Engine and it could automatically regulate the airflow, thereby, not only reducing the cost but also making our movie watching experience better.

Lastly, there needs to be an interface to this entire system. This may manifest typically as a mobile application and it can also be used as a web-based application. This will help to provide the Machine to People interface to the solution.

IoT in the Real World

Now that we have understood the concepts, let’s understand a few ‘Examples on How IoT Works’

The shopper of today likes to feel and touch a product before making a purchase but also prefers the convenience of a digital lense. Today, IoT is making proximity marketing a reality such that when a shopper who frequents a particular store is in close proximity of that store, IoT sensors can send the information of the user to the hyper decision framework, that will analyze shopper behavior and shopping pattern to send the right message, at the right location, at the right time and to the right person. More examples